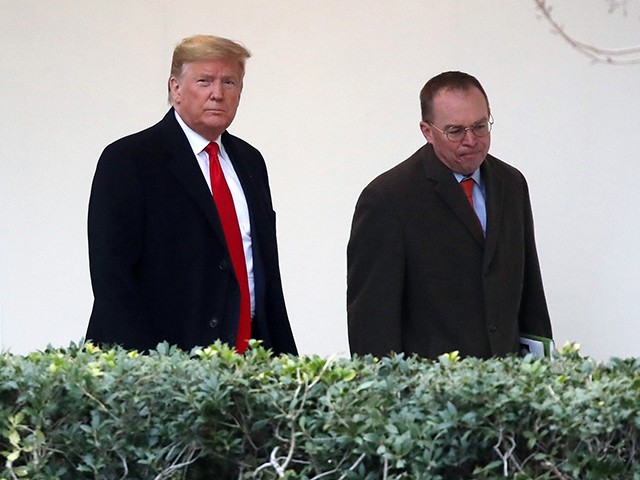 “In the summer of 2019, the Office of Management and Budget (OMB) withheld from obligation funds appropriated to the Department of Defense (DOD) for security assistance to Ukraine,” the eight-page watchdog report read.

“Faithful execution of the law does not permit the President to substitute his own policy priorities for those that Congress has enacted into law. OMB withheld funds for a policy reason, which is not permitted under the Impoundment Control Act (ICA). The withholding was not a programmatic delay. Therefore, we conclude that OMB violated the ICA,” it concluded.

The Office of Management and Budget placed a hold on the aid on July 25, “pending a policy decision,” and was lifted on September 12, the office’s general counsel Mark Paoletta has said. Paoletta wrote in a December letter to the GAO that the hold was a “programmatic delay,” and thus, Congress did not require prior notice of the move.

The OMB issued a statement in response to the report’s findings, reaffirming that the hold was appropriate.

“We disagree with GAO’s opinion. OMB uses its apportionment authority to ensure taxpayer dollars are properly spent consistent with the President’s priorities and with the law,” OMB spokeswoman Rachel Semmel said.

The report comes one day after House Speaker Nancy Pelosi (D-CA) sent to articles of impeachment against the president — abuse of power and obstruction of Congress — to the Senate amid pressure from Republicans and several Democrats in the upper chamber. In addition to transferring the articles, the speaker also named the seven House Democrats who will serve as impeachment managers in the Senate’s impeachment trial, selecting: House Intelligence Committee Chairman Rep. Adam Schiff (D-CA), House Judiciary Committee Chairman Rep. Jerry Nadler (D-NY), and Reps. Hakeem Jeffries (D-NY), Val Demings (D-FL), Zoe Lofgren (D-CA), Jason Crow (D-CO), and Sylvia Garcia (D-TX). Schiff will take on the role of lead impeachment manager.

Senate Majority Leader Mitch McConnell (R-KY) said Tuesday that “in all likelihood,” the trial will begin next Tuesday.

“We’ll be able to go through some preliminary steps here this week, which could well include the Chief Justice coming over and swearing-in members of the Senate and some other kind of housekeeping measures…which would set us up to begin the actual trial next Tuesday,” McConnell said at a press conference.

Pelosi unveiled a formal impeachment inquiry after a partisan CIA analyst alleged in a whistleblower complaint that President Trump pressured Ukraine’s president to review allegations of corruption against former Vice President Joe Biden and his son, Hunter Biden, in an attempted exchange for U.S. military assistance. President Trump and Ukrainian President Volodymyr Zelensky have repeatedly denied any pressure was applied during their July 25 telephone call and the White House published transcripts of the world leaders’ call as evidence that no wrongdoing occurred.

Last month, a top aide to Zelensky, confirmed that the eastern European country never believed that U.S. military aid was tied to any investigations.

“We never had that feeling,” Andriy Yermak told TIME magazine. “We had a clear understanding that the aid has been frozen. We honestly said, ‘Okay, that’s bad, what’s going on here.’ We were told that they would figure it out. And after a certain amount of time the aid was unfrozen. We did not have the feeling that this aid was connected to any one specific issue.”

President Trump has repeatedly slammed the impeachment process as a “hoax” and an “illegal, partisan attempted coup.”

Trumponomics Turning the US Into a Full-Time-Jobs Nation?