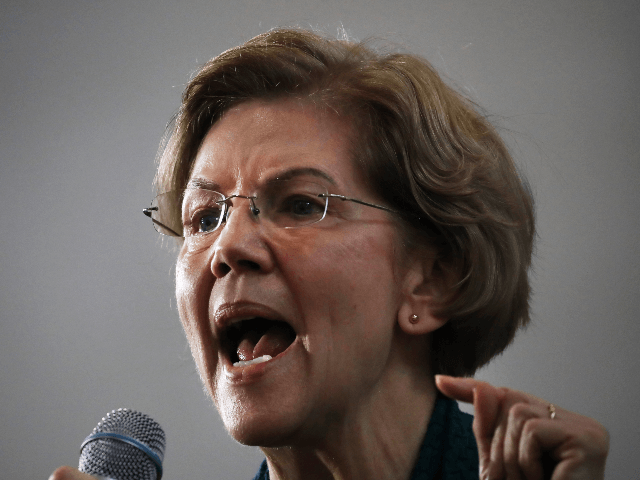 Sen. Elizabeth Warren (D-MA) sent a letter to a number of U.S. banks, asking them to detail the preparations they are making for what she considers the impending climate change crisis, Reuters reported on Wednesday.

According to Reuters, Warren — an advocate for the Green New Deal and Blue New Deal — sent a letter to executives at Citigroup, Bank of America, Goldman Sachs, JP Morgan, Morgan Stanley, Wells Fargo, Bank of New York Mellon, and State Street, asking them to detail the “risks caused by the climate crisis on the financial industry” and the steps the banks are taking “to adapt to mitigate these risks.”

“To protect themselves and the economy from climate-driven catastrophes, large financial institutions must act quickly to address risks,” Warren wrote in a letter, according to Reuters.

“I write to ask for more information about the risks caused by the climate crisis on the financial industry and your institution’s practices, including what steps, if any, your institution is taking to adapt to mitigate these risks,” she continued, asking for a response by February 7.

Warren released a broad, multi-trillion dollar plan to address climate change in September, which was largely inspired by Washington Gov. Jay Inslee, who ran his short-lived presidential campaign almost entirely on the issue of climate change.

Warren claimed the transportation and energy sector makes up roughly 70 percent of all U.S. carbon emissions, but she believes her Green Apollo plan, which calls for a $400 billion investment in research and development, will “spur innovation and help us to develop the technology we need to go the final mile.”

She announced an additional $1 trillion “to match Governor Inslee’s commitment and to subsidize the economic transition to clean and renewable electricity, zero-emission vehicles, and green products for commercial and residential buildings.” She said she will pay for this by getting rid of the Trump administration’s tax cuts.

The presidential hopeful also told supporters that she hopes to phase out new vehicles, homes, and buildings that produce carbon emissions over the next 15 years.

“We need to say by 2028, we’re not going to do any more buildings and houses that have any carbon emissions,” she told supporters in Keene, New Hampshire, in September. “By 2030, no more cars with carbon emissions, and by 2035 no more production of electricity that has carbon emissions.”

When asked to name the steps her campaign has taken to limit its environmental impact, during an October appearance on New Hampshire Public Radio, Warren said she “mostly” flies commercial.