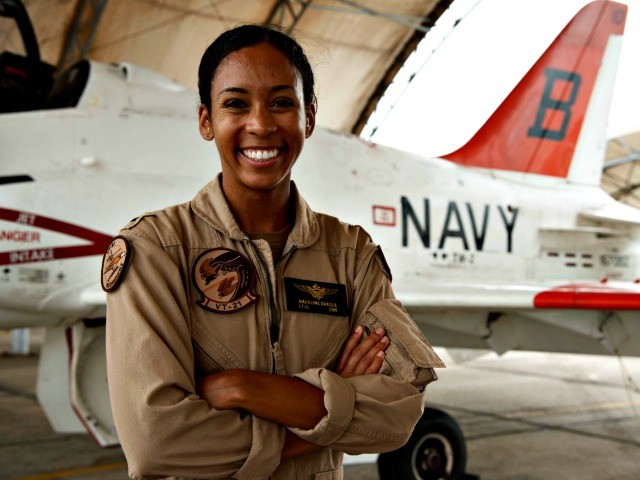 “I’m excited to have this opportunity to work harder and fly high performance jet aircraft in the fleet,” Swegle commented, adding, “It would’ve been nice to see someone who looked like me in this role; I never intended to be the first. I hope it’s encouraging to other people.”

She followed in the footsteps of the Navy’s first Black American female naval aviator, Brenda E. Robinson, who earned her wings in 1980 and became the 42nd woman to be designated a naval aviator, the Navy said in a press release.

“She has joined a select group of people who earned Wings of Gold and answered the call to defend our nation from the air. The diversity of that group—with differences in background, skill and thought—makes us a stronger fighting force,” Miller noted.

On its Twitter profile Tuesday, the Navy shared a video of Swegle talking about her achievement:

THE SKY IS THE LIMIT.

Even though she was excited to begin her training, Swegle also felt intimidated by the aircraft. However, she eventually mastered it through hard work and determination.

“It’s really cool to think of all the things that I’ve done now which I never thought I’d be able to do,” she said, adding that she felt representation was important because of America’s diversity.

“I would like everyone to believe that they can achieve whatever they want to do,” she commented.

Cdr. Matthew Maher said he hoped her example would inspire others to consider becoming a pilot.

“It doesn’t matter who you are, what you look like, where you came from. Once we have the uniform on, we’re all on the same team and we all are trying to accomplish the same mission,” he concluded.