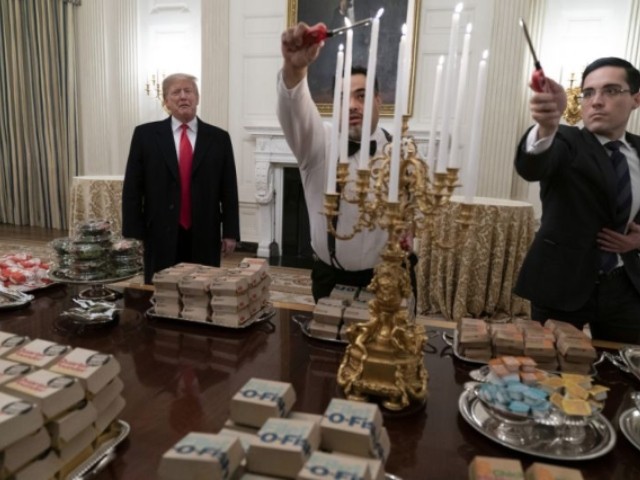 Liberal website Vox, criticized President Trump on Tuesday for serving fast food to the Clemson Tigers. Claiming that Trump’s belief that fast food would be the preferred meal of the athletes, was “racist and classist.”

The president took criticism from much of the mainstream media for decision to go with fast food. Including accusations that he was “disrespecting” the players, was “unsophisticated,” or was somehow being cheap, Vox said in its January 15 post.

“One poked fun at the juxtaposition of presumably hundreds of thousands of dollars’ worth of silver and china ‘holding $29.50 of lukewarm dog shit,’” Vox explained.

“Another called it ‘probably the best metaphor for Trump’s presidency that I can think of,’” the left-leaning site reported.

While Vox went on to point out that Clemson’s star quarterback, Trevor Lawrence, thought the White House visit was “awesome.” The liberal site proceeded to point out that Trump also took accusations that his fast food feast was really rooted in racism.

But for some, Trump’s comments, particularly when he speculated to reporters prior to the event that “I would think that’s their favorite food,” referring to chains like McDonald’s and Wendy’s, rang as classist or racist. It’s not much of a leap to assume that Trump guessed that many Clemson Tigers are black or come from working-class backgrounds, and thus presumed they prefer cheap, fatty foods over anything the White House would typically serve for guests in the State Dining Room.

Vox then noted that fast food consumption even grows as income levels rise, so the assumption that only poor people eat fast food is a “false assumption.”

Still, the perception that Trump was revealing his “racism” was pervasive in the Vox report.

Yet as one person on Twitter pointed out, it wouldn’t be difficult to imagine a different president, perhaps one with less of a history of racism, buying a bunch of fast food for a college football team and coming across as “fun” or “accessible.”

Worse, Vox claimed that patronizing fast food chains is advancing “animal suffering” because the corporations that run them are built on a “vast network of animal suffering and ecological destruction” that “has, in turn, produced an epidemic of ill health.”

In the end, Vox said that Trump’s actions told his detractors volumes.

“Trump’s comments that presume college athletes, who likely take great care of their bodies, would prefer a cheap buffet of burgers and fries over the kinds of food that one would expect to be served during a White House visit, have raised concern for some,” the left-wing site concluded.

The “some” should probably not worry about such things. According to the ESPN height and weight chart for the Clemson Tigers, 39 of their 85 players weigh 250 pounds or more. Including 14 who weigh 300 pounds or more. While no one should assume these highly-trained athletes eat fast food everyday. It’s also highly unlikely that those 39 players amassed that weight while subsisting solely on a diet of bell peppers and kale.