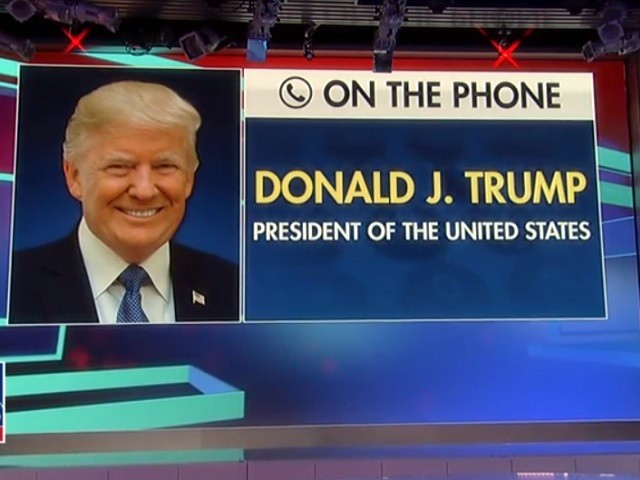 PIRRO: Now, I want to move on to another subject. The New York Times reported that the FBI opened a counterintelligence investigation the day after you fired James Comey in May of ’17. And the investigation was whether you were actively working for Russia or unwittingly.

So, I’m going to ask you, are you now or have you ever worked for Russia, Mr. President?

And what happened after I fired him? Andrew McCabe, Peter Strzok, his lover, Lisa Page, they did it. And, you know, they’re all gone. Most of those people, many, many people from the top ranks of the FBI, they’ve all been fired, or they had to leave are. And they’re all gone.

This is what they were talking about. And, obviously, nothing was found.

And I can tell you this, if you ask the folks in Russia, I’ve been tougher on Russia than anybody else, any other — probably any other president period, but certainly the last three or four presidents, modern-day presidents. Nobody’s been as tough as I have from any standpoint, including the fact that we’ve done oil like we’ve never done it, we’re setting records in a country with oil and exporting oil and many other things. So, which is, obviously, not great for them, because that’s what they — that’s where they get their money for the most part. But many other things.

So I think it was a great insult. And The New York Times is a disaster as a paper. It’s a very horrible thing they said, and they’ve gone so far that people that weren’t necessarily believers are now big believers, because they said that was a step too far. They really are a disaster of a newspaper.

PIRRO: Well, you know, when you think about it, the people that were involved in that, all of the people have since been fired or gone, whether —

But The Washington Times — The Washington Post, I should say, is following up reporting that you went to unusual lengths to keep your conversations with President Putin under wraps.

Why not release the conversation that you had with President Putin in Helsinki, along with some other stuff that might involve FISA, Bruce Ohr and the whole lot of them?

TRUMP: Well, Jeanine, I would, I don’t with care. I mean, I had a conversation like every president does. You sit with the president of various countries. I do it with all countries.

I’m not keeping anything under wraps. I couldn’t care less.

I mean, it’s so ridiculous. These people make it up. Washington Post, that’s basically the lobbyist for Amazon. You know, he uses that — Bezos has got bigger problems than anybody right now. But Bezos uses that as his lobbyist, OK, as far as I’m concerned.

And The Washington Post is almost as bad or probably as bad as The New York Times. Think of it, I have a one-on-one meeting with Putin like I do with every other leader. I have many one-on-one — nobody ever says anything about it. But with Putin, they say, oh, what did they talk about?

We talked about very positive things because — look, we are beating everybody. Our economy is the strongest in the world right now, Jeanine. Nobody even close. China’s down 38 percent. Russia’s not doing well, its economy.

Most countries are not doing well. We’re doing phenomenally. Even though we’re paying interest rates because we’re normalizing. You know, Obama had zero interest. Anybody can do that.

And our economy’s now better than ever. We’re almost at our high with the stock market again. So, it’s really — can you imagine where they say that I met with Putin, I met with every leader just about individually. I meet with Modi, I meet with — in Japan, I meet with Abe. I meet with all of them, but nobody says anything.

But I meet with Putin, and they make a big deal. Anybody could have listened to that meeting, that meeting is up for grabs.

You know, the whole Russia thing, it’s a hoax. It’s a terrible hoax. You know it probably better than — you, Gregg Jarrett, so — Dan Bongino.

People that look at it, it’s a total hoax. Everybody knows it. And it’s really a shame because it takes time, and it takes effort.

And everybody knows there was no collusion whatsoever. They have found no collusion, and they won’t find collusion because I had nothing to do — I was a better candidate than Hillary Clinton. She was a terrible candidate.

And the fact is, I was obviously a good candidate. I won every debate. I won everything I did, and I won, and I won easily — 306-223, I believe. And that’s a big difference in the college, in the Electoral College.

TRUMP: So that’s — but it’s really, it’s really a shame, Jeanine. It really is a shame. Such a waste of time.

PIRRO: It is a shame. It is a waste of time. It’s a waste of energy, and, you know, some people have to say to themselves, how can you deal with all of this?

This New York Times article, to be absolutely truthful with you, just seems to be another rehash of the same players and the same arguments, and the same dossier, you know, just to keep it going, and they’ll keep it going as long as they can.

What keeps you going? I mean, you’ve got such fight in you, it is unbelievable.

TRUMP: Well, I guess I have good genes —

TRUMP: — because, you know, somebody said the other day no president should have to go —

TRUMP: — through what you’re going through, Mr. President. Because I’m going through all of this nonsense, it’s all nonsense, but I have to be careful because these are dirty players. They’re no good.

And you’ve got the Mueller investigation, you’ve got all this nonsense. There’s no collusion, no nothing.

And, you know, they say this should never happen again. Never again should this happen. And that’s the story.

But despite that, we’ve done more than any other administration by far in the first two years. We’ve had tremendous success.

PIRRO: All right. And now, of course, Little Adam Schiff, as you call him, is going to be dragging in, and Jerry Nadler are going to be bringing in Michael Cohen, an already-proven liar, to Congress, convicted of it. You know, are you — are you worried that —

TRUMP: No, look, I was a client of his. You know, and you’re supposed to have lawyer/client privilege, but it doesn’t matter because if I’m a very honest person, frankly. But he’s on trouble on some loans and fraud and taxi cabs and stuff that I know nothing about.

TRUMP: And in order to get his sentence reduced, he says, I have an idea, I’ll tell — I’ll give you some information on the president.

Well, there is no information. But he should give information maybe on his father-in-law, because that’s the one that people want to look at. Because where does that money — that’s the money in the family. And I guess he didn’t want to talk about his father — he’s trying to get his sentence reduced.

So, it’s pretty sad. You know, it’s weak, and it’s very sad to watch a thing like that. I couldn’t care less.

PIRRO: What is his father-in-law’s name?

TRUMP: I don’t know, but you’ll fine out, and you’ll look into it because nobody knows what’s going on over there.

PIRRO: Will you release —

PIRRO: I can’t wait to read it.

Will you release the FISA? We’re all waiting for the FISA. That will give us (ph) —

TRUMP: Well, at the right time, we will probably do that. If that’s necessary, we’ll do that. You know, that’s very, very important stuff.

TRUMP: And, you know, as you know, a lot of bad things happened when a lot of elements of what we’re talking about. And at the right time, we will probably do that. That’s right.

PIRRO: All right. And my — are your lawyers working to keep the Mueller report from being made public?

And, you know, despite that what we’re doing is amazing. But actually, what we’re doing in this, too, because we’re exposing people that are corrupt. People are being exposed by this that are totally corrupt. A lot of the people that don’t get mentioned even in that article today, the phony article in The New York Times, there’s a lot of corruption, and we’re exposing it. And I’m going to put that down someday as one of my greatest achievements.