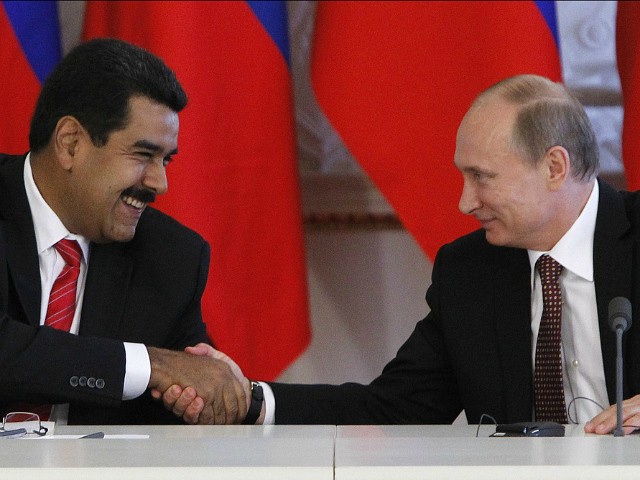 Since taking office in 2017, the Trump administration has led the way in its efforts to weaken and oust Maduro’s regime, principally through the imposition of sanctions. Moscow has instead provided extensive assistance to Maduro in the form of loans and military support and has now stepped up its diplomatic efforts to ensure the regime’s survival.

“Washington’s shameless line on the unconstitutional formation of alternative government structures of Venezuela, trying to appoint Venezuelan authorities as legitimate and to deny this to others, delays the sanctions sticking to the deterioration of the socio-economic situation and hurts the lives of Venezuelans, representing an open attack on the sovereignty of Venezuela,” the Russian Foreign Ministry said in a statement.

“We should not provoke a greater division of Venezuelan society, we must promote the search for harmony, the union of the efforts of the Government and the opposition in order to reduce tension,” it continued.

Russian officials were among the various attendees of Maduro’s inauguration on Thursday, over eight months after he successfully rigged the second consecutive presidential election where opposition candidates were banned from running. Other countries to attend the ceremony included officials from authoritarian regimes including China, Cuba, Bolivia, and Nicaragua.

In recent years, Maduro has been forced to develop closer ties with the Kremlin, as his government has found itself increasingly shunned by democratic countries in Latin America and around the world. During their meeting in Moscow last month, Maduro personally thanked Vladimir Putin for helping his regime “survive” through financial and military support.

Last month, Maduro revealed that Moscow had agreed to invest $6 billion in Venezuelan oil and mining production, while the two sides recently held joint military exercises that included the temporary placement of Russia’s nuclear-capable bombers. The Kremlin recently announced that it intends to open a military base in Venezuela, although such plans have not yet been finalized.

There have also been indications of minor tensions between the two sides, as Venezuela repeatedly fails to meet its obligations in the form of oil shipments. In November, the head of Russian oil company Rosneft, Igor Sechin, personally traveled to Caracas to demand improvements after a large number of oil shipments arrived behind schedule or were not delivered at all.

“For our part, we reaffirm our determination to work closely with friendly Venezuela, its people and legitimate authorities,” the Russian ministry’s statement added. “We will continue to strengthen the strategic partnership, which, as the recent talks between the leaders of our countries have shown, is steadily developing in all areas of mutual interest. We will continue to assist Venezuela in overcoming their difficult economic situation.”