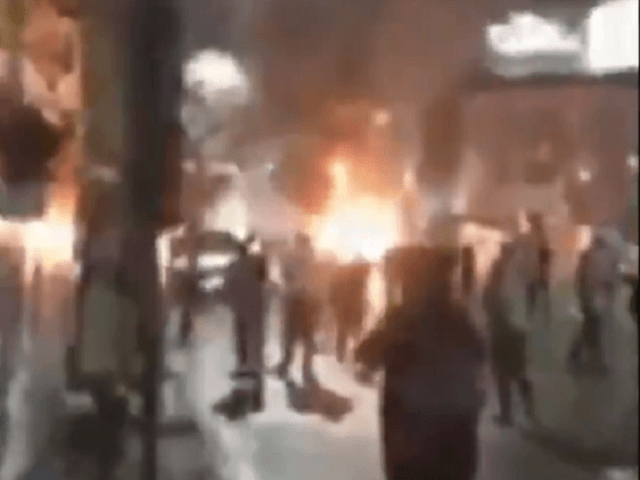 Rioters in Philadelphia attacked police officers and set a police cruiser on fire following the shooting of an armed black man. Two police officers shot the man after he chased them around a car with a knife and refused to drop the weapon.

Protests are turning violent in multiple parts of the City of Brotherly Love after two police officers were forced to defend themselves from a man wielding a knife during a domestic situation, Breitbart News reported.

Photos and video tweeted from the scene show police vehicles being set ablaze in the streets of Philadelphia Monday night.

One vehicle explodes from the fire as onlookers stand by and record the fire.

Protests in multiple parts of Philadelphia turned violent on Monday night after two police officers shot a black man armed with a knife. Protesters took to the streets shortly after a video showing the man chasing police with a knife was shot and killed.

Protesters are yelling at anyone carrying cameras as violence and looting continue. Protesters are equating journalists and police.

In another part of Philadelphia, another group took to the streets and began smashing store windows, ABC6 in Philadelphia reported.

Bob Price serves as associate editor and senior news contributor for the Breitbart Texas-Border team. He is an original member of the Breitbart Texas team. Price is a regular panelist on Fox 26 Houston’s What’s Your Point? Sunday-morning talk show. Follow him on Twitter @BobPriceBBTX and Facebook.