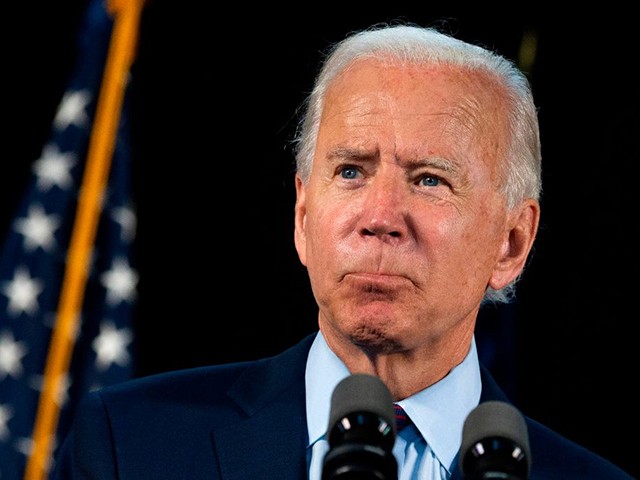 One-fifth of Democrat voters believe that Joe Biden (D), the Democrat Party’s presumptive nominee, is suffering from “some form” of dementia, and a majority of likely voters say it is important for him to address the issue publicly, a Rasmussen Reports poll released Monday revealed.

The survey, conducted June 25-28 among 1,000 likely voters, asked respondents, “From what you have seen and read, do you believe Joe Biden is suffering from some form of dementia?”

The survey found that 38 percent of voters, overall, believe he has dementia, while 20 percent within his own party say the same. According to Rasmussen, “that compares to 66% of Republicans and 30% of voters not affiliated with either major party.”

A majority, 61 percent, of all voters believe it is “important” for the former vice president to address the issue publicly, “with 41% who say it is Very Important.”

Slightly over one-third of overall voters, 36 percent, do not believe it is an important issue to publicly address, although “fifty-one percent (51%) of both Democrats and unaffiliated voters agree that it is important for Biden to address the dementia issue publicly.”

Rasmussen emphasized that it did not specifically define the word “dementia” in its survey, providing the Merriam-Webster dictionary in the summary of the findings.

“According to the Merriam-Webster dictionary, dementia is ‘a usually progressive condition (such as Alzheimer’s disease) marked by the development of multiple cognitive deficits (such as memory impairment, aphasia and the inability to plan and initiate complex behavior),’” it clarified.

The survey’s margin of error is +/- three percentage points

The survey coincides with a Restoration PAC poll released last week, which found that only 50 percent of voters in both Michigan and Wisconsin — crucial battleground states — view Biden as “up the task mentally and physically to handle the duties of president of the United States.”

Despite the surveys showing Biden leading President Trump by double digits in each of the states, voters appear to remain unsure if the former vice president is up to the task of the presidency.

Slightly over 50 percent of Michigan voters said “yes,” Biden is up to the task. However, 40.2 percent said “no,” and another 9.5 percent indicated that they were “undecided” on the matter. Similarly, 50 percent of respondents in Wisconsin expressed confidence in Biden, while 42.2 percent said “no” and 7.8 percent remained undecided.

Pennsylvania voters expressed similar sentiments. Only 48.7 percent said Biden was up to the task both mentally and physically, compared to 45 percent who said “no” and 6.3 percent who remained unsure. Across the board, the results are virtually split between those who definitively say Biden is mentally and physically able to handle the presidency and those who said “no” and remain uncertain.

Biden has remained out of the public spotlight in recent months, as his campaign largely uses the Chinese coronavirus pandemic as a justification for his absence from public events. Even so, Biden has struggled in both remote interviews and video appearances, routinely experiencing verbal flubs as his campaign has repeatedly struggled with technical difficulties.

Last week, the presidential hopeful falsely claimed that the coronavirus pandemic had killed 120 million people, right as the live stream of his event in Lancaster, Pennsylvania, glitched.