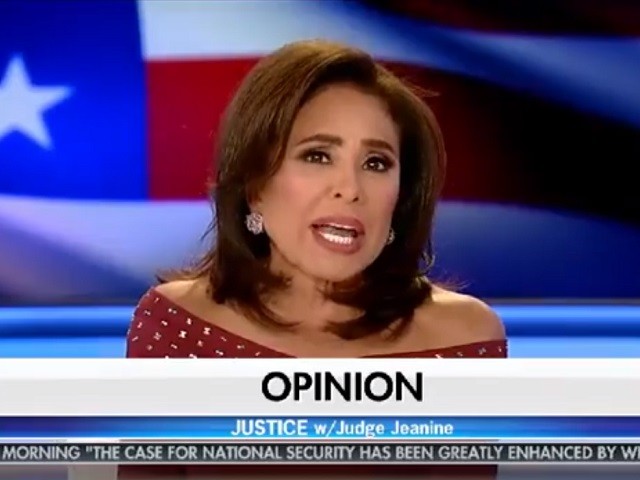 Saturday during her “Opening Statement” segment on Fox News Channel’s “Justice,” host Jeanine Pirro hammered Department of Justice special counsel Robert Mueller for his use of heavy-handed tactics in arresting political operative Roger Stone in a pre-dawn raid for what she deemed to be “process crimes.”

Pirro questioned the necessity for such a law enforcement presence and said it could have backfired given Stone’s wife is deaf.

“The Mueller team gets an indictment against Roger Stone which is represented by an attorney. But instead of notifying the attorney and requesting he bring his client in for arraignment — standard protocol in cases like Stone’s —  the Mueller team decides on Gestapo tactics,” Pirro said. “While still dark and well before dawn, 29 armed FBI agents and a SWAT team donning body armor and fatigues, and tactical vests arrive at Stone’s home. Seventeen vehicles including armors trucks, lights flashing, a bullhorn. They begin to banging on Stone’s home, yelling, ‘FBI — open the door.’ The only people home were Stone, his wife, and their dogs. And lo and behold CNN is there with cameras in tow, waiting for the FBI for an hour waiting for to it starts. Now, why would they be there? Especially when the FBI considers this dangerous enough to have SWAT teams and guns drawn. Why were you there in position?”

Pirro speculated that Mueller used the pre-dawn raid to “poison the jury pool” to make Stone seem like “public enemy number one.”

“What the Mueller team did was not only laughable, it was embarrassing to everyone in law enforcement. Waking a couple of pre-dawn is chaotic enough. But when the wife is deaf, a directive to her by someone with a gun drawn when she cannot hear the directive is a catastrophe waiting to happen. This show was put on to embarrass and intimidate Stone. He wasn’t a flight risk, and he had no guns. His passport was expired or about to expire. Mueller’s intents were to poison the jury pool to make Stone seem like public enemy number one. And his indictment isn’t even for a violent crime. It has nothing to do with Russia or collusion. It’s a process crime. You keep asking the same questions over and over and over hoping there will be a mistake. And when there is, you indict. The president is right. Stone lying to Congress? Jim Comey lied to Congress. John Brennan lied to Congress. Clapper. And dear Hillary — that woman lied every time she opened her mouth. Need I go on?”