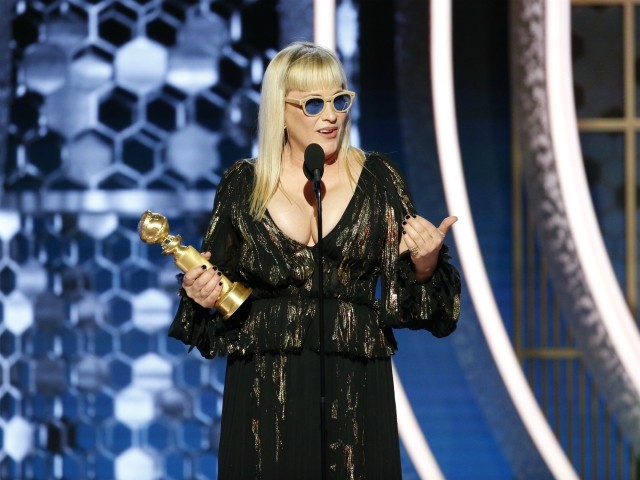 Actress Patricia Arquette attacked President Donald Trump during her rambling Golden Globes acceptance speech on Sunday, lambasting the president for his recent tweets in which he spelled out his hardline approach toward Iran.

Arquette, who won a Golden Globe for her supporting role in Hulu’s The Act, sported dark sunglasses and open cleavage while delivering a semi-coherent acceptance speech in which she invoked Iran, Australia, climate change, and the 2020 presidential election.

Patricia Arquette burns Trump and his war-hawking, sends hearts and concerns out to Australia and pleads for everyone to vote in 2020.#goldenglobes #goldenglobes2020 pic.twitter.com/NjireGQ2nm

“We’re not going to look back on this night in the history books, we will see a country on the brink of war, the United States of America, the president tweeting out a threat of 52 bombs, including cultural sites. Young people risking their lives traveling across the world. People not knowing if bombs are gonna drop on their kids’ heads. And the continent of Australia on fire,” the actress said.

Arquette has been a staunch anti-Trump activist, using her Twitter account to repeatedly insult the president. She recently called President Trump a “national security risk” and has advocated for passage of the Green New Deal.

“Thank you, Robert Mueller and everyone working to make sure we have sovereignty for the United States of America!” she said a last year’s ceremony.

Oil’s Up After US Airstrike, But Will It Last?

Suspect in Iowa woman's slaying was a hardworking farmhand | Conservative.ly

US marks 9/11 with somber tributes, new monument to victims | Conservative.ly