No ‘Specific’ Threats to U.S. for Christmas 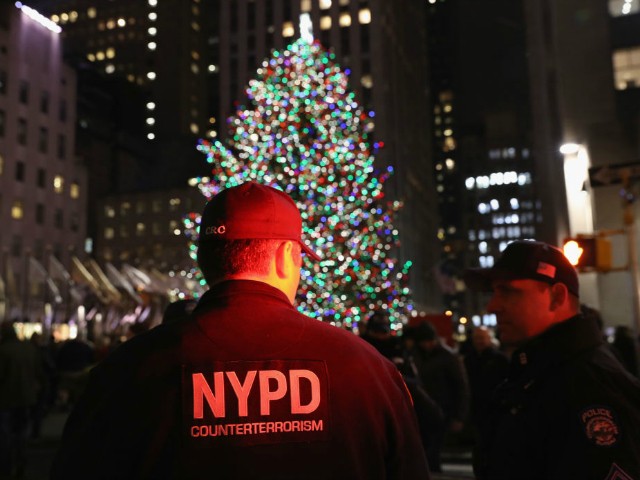 The United States is not facing any specific or credible threats as Americans kickstart the Christmas holiday this year, the FBI and U.S. Department of Homeland Security (DHS) told Breitbart News on Monday, urging revelers to remain vigilante.

A spokesperson for DHS acknowledged that the U.S. continues to be concerned about the Islamic State (ISIS/ISIL) and al-Qaeda, which have threatened to attack Western countries during the Christmas season.

“ISIS and al-Qaeda continue to spew hatred and fall for violence against those who celebrate freedom and democracy. Although the military campaign might be drawing to an end, we remain committed to defeating their violent, nihilistic ideology,” the spokesperson told Breitbart News.

A spokesperson for the FBI, a component of the U.S. Department of Justice (DOJ), declared in a statement sent via email:

The FBI is not aware of any specific and credible threats to the United States around the Christmas holiday. The FBI regularly assesses intelligence regarding possible threats to the U.S. and will continue to work closely with our federal, state, and local law enforcement partners should there be any potential threat to public safety.

Echoing other U.S. government agencies in charge of national security, the FBI urged Americans to remain vigilant during the Christmas season.

“As always, the FBI asks members of the public to maintain awareness of their surroundings and to report any suspicious activity to law enforcement,” the FBI spokesperson said. “Americans traveling overseas are encouraged to register with the State Department’s Smart Traveler Enrollment Program to stay up to date on any safety and security developments.”

The latest bulletin, issued on September 14 and expiring on January 18, noted that the U.S. is not facing any credible, specific, or impending terrorist threat for the Christmas holiday, but it also called on Americans to remain vigilant against any suspicious activity.

A spokesperson for DHS told Breitbart News, “The threat level remains consistent although there are no specific, imminent threats at this time,” adding:

Despite the shutdown, DHS remains on the job with our workforce focused on protecting the American people and the Homeland. We are securing the border, screening cargo, working with partners to protect the skies and those traveling in them, and ensuring that the holiday season continues without disruption. Many of those carrying out these vital efforts are doing so without pay.

Be vigilant— if you see something, say something. Do not be afraid to celebrate the season but be aware of your surroundings. Please be responsible in your celebrations (don’t drink and drive!) and have a wonderful holiday season.

Although U.S. agencies say there are no specific threats against the U.S., jihadi groups like the Islamic State (ISIS/ISIL) and al-Qaeda remain intent on ruining the holidays for all Americans, the DHS conceded.

Consistent with previous years, ISIS has increasingly threatened to attack Western countries during the Christmas season.

On Monday, the Israeli-based research group known as the Intelligence and Terrorism Information Center (ITIC) reported:

This past week there was an increase in ISIS and ISIS supporters’ propaganda material (notices and videos) threatening to attack Western countries and their leaders. … In ITIC assessment the campaign was organized for the pre-Christmas and Christmas season. In the background were [U.S. President Donald] Trump’s announcement that he would withdraw the American troops from Syria raising the morale of ISIS and its supporters; and ongoing intensive pressure is being exerted on ISIS in eastern Syria. The ISIS video calling for terrorist attacks includes pictures of coalition attacks in eastern Syria with the voice of ISIS leader al-Baghdadi in the background calling for vengeance.

“They call for attacks on Trump,” ITIC noted, referring to ISIS, and later added, “One the announcements threatens a drone attack against Manhattan.”

One of the ISIS videos “has pictures of Christmas festivities along with calls for attacks. The attacker or attackers are called to dress appropriately, then infiltrate themselves among the revelers and detonate their bombs. The video explicitly calls for stabbing and vehicular attacks (‘Kill them with a car or a knife’),” ITIC noted.

U.K. Security Minister Ben Wallace warned last week that a resurgent al-Qaeda is planning a new series of spectacular attacks on airports and airliners and is expected to use explosive or chemical-laden drones in a bid to become the world’s most feared jihadi group.

Authorities have already linked ISIS to at least one Christmas holiday attack in Europe, and the U.S. State Department has warned of the risk of a terrorist attack during the Christmas holidays in Barcelona, Spain’s second-largest city.

“In the midst of the holiday season, we must remain even more vigilant as jihadists remain intent on spreading fear and terror during this time of year,” Rep. Mike McCaul (R-TX), the chairman of the House Homeland Security Committee, told Homeland Security this month.