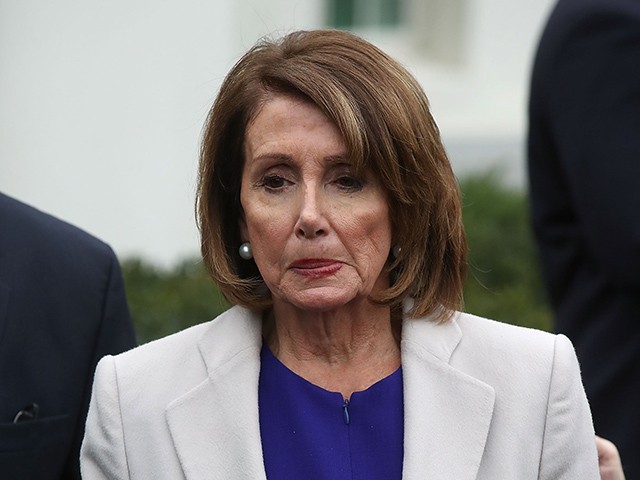 House Speaker Nancy Pelosi (D-CA) on Friday canceled a trip to Afghanistan, claiming that she planned on flying commercial to the war zone but opted against it after President Donald Trump revealed she was making the journey.

“After President Trump revoked the use of military aircraft to travel to Afghanistan, the delegation was prepared to fly commercially to proceed with this vital trip to meet with our commanders and troops on the front lines,” Pelosi’s deputy chief of staff, Drew Hammill,  said in a statement.

In the middle of the night, the State Department’s Diplomatic Security Service provided an updated threat assessment detailing that the President announcing this sensitive travel had significantly increased the danger to the delegation and to the troops, security, and other officials supporting the trip. This morning, we learned that the Administration had leaked the commercial travel plans as well.

In a Thursday letter to Pelosi, President Trump notified the speaker that he was revoking access to the plane for her trip to Egypt, Brussels, and Afghanistan, writing: “In light of the 800,000 great American workers not receiving pay, I’m sure you would agree that postponing this public relations event is totally appropriate.”

“I also feel that, during this period, it would be better if you were in Washington negotiating with me and joining the strong border security movement to end the shutdown,” he continued. President Trump said Pelosi was welcome to fly on a commercial plane to make the visit. “Obviously, if you would like to make your journey by flying commercial, that would certainly be your prerogative,” he wrote.

Hammill’s statement on Democrats’ purported plan to fly commercial is not backed by any evidence, particularly considering that photos and videos from Thursday show House Democrats slated to accompany her were stuck on a U.S. Airforce bus traveling to Andrews Air Force Base after the military jet was revoked. This fact all but confirms the congressional delegation (CODEL) had no plans to fly commercial.

Fox is told CapHill security officials got an emergency call from the Pentagon canceling the overseas trip due to shutdown. No one here knows if the trip is going to happen or not. Lots of confusion pic.twitter.com/eFCqsaNcGe

House Members sitting on an Air Force bus b/t the Longworth and Rayburn House Office Buildings waiting to see if they are still going overseas after Trump cancelled the trip. pic.twitter.com/e5IgidRPZu

Bus taking lawmakers on codel just left Capitol Hill. Lawmakers on board. Unknown who on board and whether Speaker Pelosi was or not pic.twitter.com/X3P63r2CKW

Members including House Intelligence Committee Chairman Adam Schiff getting off the bus in front of the Capitol. pic.twitter.com/G6JMtVCg8h

Democrats were scheduled to depart around 3:00 p.m. EST for their overseas trip, according to the White House. Shortly after access to military jet was revoked, Hamill said Democrats planned to meet with NATO leaders in Brussels to “obtain critical national security & intelligence briefings from those on the front lines.” This suggests Pelosi and other Democrats would have been given documents comprised of sensitive information pertaining to the U.S. mission in Afghanistan, once again reducing the likelihood that they would have put the intelligence at risk by flying commercial.

Speaking to the media after jet access was revoked, Sen. Mark Warner (D-VA) accused President Trump of breaking the law by revealing Pelosi visit to Afganistan, citing potential security concerns. “I don’t understand if Mr. Trump understands the laws and procedures in our country,” Warner told CBS when asked about the cancelation. “I don’t know what Speaker Pelosi is doing, not doing. Sometimes members take trips into dangerous areas, and only announced after the fact.”

The trip’s cancellation comes as President Trump and Democrat leaders remain locked in a bitter fight over a bill which would fund a U.S.-Mexico border wall to the tune of $5.7 billion White House officials met with rank-and-file Democrats on Wednesday in an effort to carve out a deal with centrist lawmakers from states where the president enjoys high levels of support. During a conference call with supporters this week, President Trump showed no signs of backing down on his chief campaign promise, reiterating his pledge to build a wall.