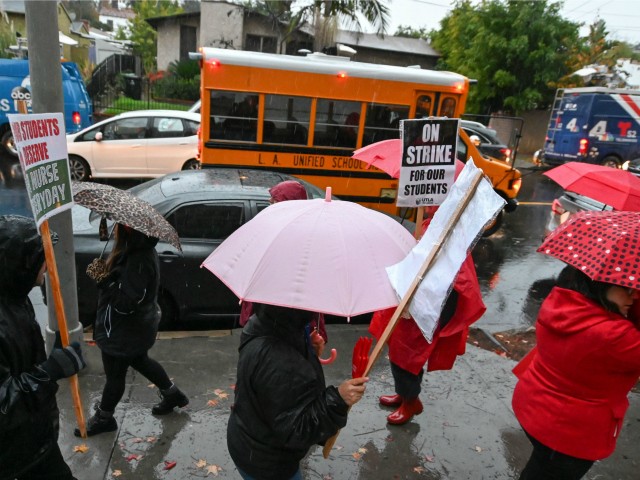 Teachers in the Los Angeles Unified School District (LAUSD) announced a strike Monday, but a California teacher who stood up to the national teachers’ unions says the so-called “grassroots” movement fueling the strike is actually a radical organization spreading socialist “propaganda.”

Tomorrow educators in LA are planning to strike for the first time in 30 years. RT a message of #RedForEd solidarity and support to @UTLAnow: Why are you with educators on strike? pic.twitter.com/KnZQJryTb8

United Teachers of Los Angeles (UTLA) wants higher pay and greater spending on public education. ABC News reports the union members – many of whom are wearing #RedForEd T-shirts – are threatening to strike “for as long as it takes.”

“We’re in the battle for the soul of public education,” states UTLA President Alex Caputo-Pearl. “Now is the moment for action.”

The schools are remaining open, however, as LAUSD has hired substitute teachers. The union calls the hiring of substitutes “irresponsible” and has urged parents to keep their children at home and join the protest.

“We are going on strike for students, who we miss in our hearts right now,” Caputo-Pearl adds. “They deserve better.”

However, Rebecca Friedrichs, who spearheaded a national movement to wrest control of public schools from teachers’ unions, writes at the Orange County Register that the #RedForEd walkouts – which played prominently last year in the Arizona teachers’ strike, as well as others – are “deceptively promoted as a ‘grassroots movement’ led by teachers”:

Today is the day. @UTLAnow educators on the front line need our solidarity and support more than ever. Send a message now to help lift their spirits on the picket line ➡️ https://t.co/j4gNo9rXsK #RedforEd 🍎 #UTLAStrong 💪🏾 #WeAreLA pic.twitter.com/jlNfeSaNfc

Friedrichs, one of seven California teachers who filed a federal class action lawsuit for return of fees previously paid to their union in the wake of the Supreme Court’s recent Janus v. AFSCME decision, writes that a teacher colleague of hers who witnessed the development of #RedForEd said “teachers were used to promote the propaganda of the NEA [National Education Association].”

Friedrichs says about her teacher-friend, “Catherine”:

Catherine also saw through their politics, “At no time were we bipartisan. It was all far left. They actually asked me at one point, ‘Well, you’re a Democrat, right?’ When I said I was Republican, there was a hit piece written about me.”

State and national teachers’ unions create all sorts of angry, far-left “grassroots movements” off the backs of teachers. Educator activists lead Antifa, the Women’s March, Black Lives Matter and Occupy Wall Street. March for our Lives was organized by teacher union leaders, and NEA gave its highest award to Colin Kaepernick while union leaders took a knee during the national anthem.

Friedrichs observes the extremes to which the teachers’ unions have gone to maintain control of public education, particularly in the shadow of the Janus decision. She notes how the national unions have now gone after charter school teachers – since charter schools are publicly funded schools that are privately operated.