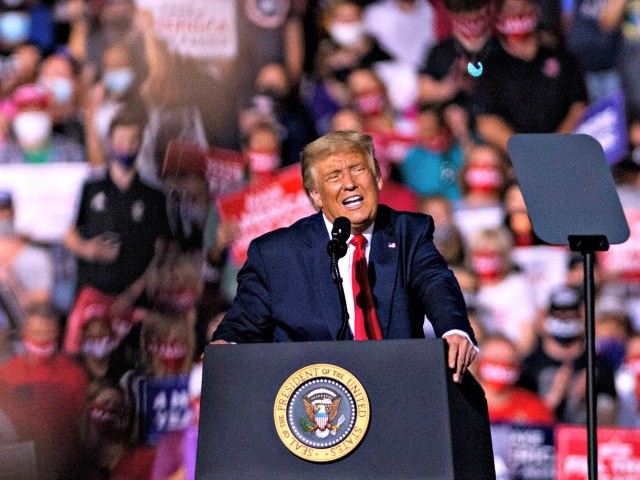 9:36 PM: Trump asks the crowd if they saw the last question when Biden revealed he wanted to transition away from oil. Trump now hitting Biden for flip-flopping on fracking. Trump says Biden is basically against oil.

Trump says it’s not even in Texas because Biden is against “oil, guns, and God.” Trump says that doesn’t work in Wisconsin or Texas.

Trump also thanking Bernie Sanders for doing him a lot of favors for calling out Biden on his past Social Security statements. He again says Sanders should a sportsmanship award for being such a good loser every time and just taking it.

9:35 PM: Trump says “the Hispanics” liked his first debate performance because he was “tough.”

9:33 PM: Trump says when he was told of the “bad news” that Obama is campaigning for Sleepy Joe, he said that Obama didn’t initially endorse Biden and was “in shock” that Biden won the nomination. He points out Obama first told Biden that he didn’t have to run for president. Trump says Biden, “one-percent Joe,” only got one percent in “prime time.”

9:31 PM: Trump says Barack Hussein Obama came on the scene today to help Biden. Crowd boos. He claims he could have had 100,000 people if not for the “configurations.” Trump says Sleepy Joe is capable of doing one of these every couple of days and he never leaves Delaware, “two minutes from the basement.”

“Something’s going on,” Trump says. “They see it.”

Trump says as good as it was four years ago, “this is stronger than it ever was. There has never been anything like it.”

Trump now says the media have been trying for a lot of years to get him with questions.

9:30 PM: Trump talks about how states run by Democrats must open and says the only person who has freedom to roam around is Gretchen Whitmer’s husband. Trump says he is doing well in Michigan because he is fighting her. Trump says the “vaccines are coming and they are going to be really amazing” and talks up the amazing “therapeutics.” Trump says after the therapeutics he feels better now than he did before he got the Coronavirus.

9:27 PM: Trump says he’s going hold a bunch of rallies in the last few days and then he’ll go home and sleep after the election is over. He is talking extensively about the best doctors in the world treating him for the Coronavirus and how each one of them studied different parts of his body. Trump says he told the doctors he had to get back on the campaign trail because he was running against Sleepy Joe: “Can you imagine losing to this guy?”

9:23 PM: Trump claims he got the Big Ten and Pac-12 back. He says he didn’t know too much about it until the Biden campaign put out an ad blaming him for canceling the season. Trump says the athletes are “young, strong people” but may not be as tall as his 14-year-old son.

Wisconsinites happy after the Badgers look like they have found a quarterback in Graham Mertz.

9:20 PM: Trump says there is some “interesting things” happening in the race and the press are “very nervous” when he is talking because they are seeing things that are happening Florida. Trump says the media are asking “what’s going on” in Florida, North Carolina, Pennsylvania.

Trump, though, says he’s a little worried about Philadelphia because “there’s a lot of things going on.”

Trump says Iowa and Nebraska are looking great because of $28 billion from China to the farmers.

Trump says he’s also doing great in Michigan, citing one poll that has him up two points. Trump says the fake news are saying this isn’t supposed to happen and this is “going even faster” than it did four years ago.

9:17 PM: Trump says Biden has been outsourcing jobs, opening borders, and sacrificing American blood and treasure in foreign wars for the last half-century.

Trump says he fights for the middle class and says he thinks Biden is fighting for Hunter. He says what the media have done is even “more of a disgrace” than the Bidens. He says there has never been a more “egregious assault” on our people and country than what the media are doing. Trump says add Big Tech and cites Section 230.
Trump said he had a much easier life in business. He says he thought politics would be easier before encountering the Swamp. Trump says the “Biden deal” is “pretty crazy” as the crowd chants “lock him up.”

9:15 PM: Trump thanks the crowd. “We had such luck here four years ago,” Trump says, predicting he will win by even more this year.

9:13 PM: Trump ready to take the stage. Enthusiastic crowd has been waiting in the cold for hours.

The temperature at Waukesha’s airport is 33 degrees.

8:30 PM: Trump has landed in Milwaukee and is on his way to Waukesha. Thousands of supporters waiting in the cold.

7:59 PM: Trump is a machine with these rallies.

Quick video of the line into the air strip. pic.twitter.com/Cj3Mo719cJ

The crowd is filling in at the President Trump rally at Waukesha County Airport. The president is scheduled to speak at 7 pm. pic.twitter.com/X7KmseHDZ8

Thousands are lined up at the Waukesha County Airport for President Donald Trump’s campaign rally at 7. pic.twitter.com/8XPL4pSY7Z