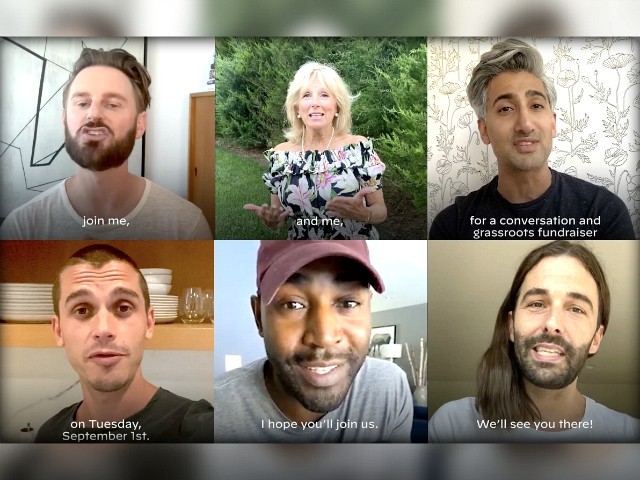 Jill Biden — the wife of Democrat nominee Joe Biden — will be teaming up with the cast of Netflix’s hit makeover series Queer Eye for a fundraiser for her husband’s presidential campaign on Tuesday.

Jill Biden and the Queer Eye cast — Jonathan Van Ness, Bobby Berk, Karamo Brown, Tan France, and Antoni Porowski — the six individuals announce their partnership in a video montage. “I have a question for you,” begins Van Ness.

“Do you care about ending this pandemic?” says Porowski in the next clip.

“Do you care about homeless veterans, about the environment?” asks Brown.

“Trans lives? Black lives?” adds France, before Jill Biden weighs in with, “Do you want to make life better for us teachers?”

“And what about healthcare for those who can’t afford it?” asks Porowski, before Berk asks, “What about just getting Donald Trump out of office?”

The Queer Eye cast says that if viewers answered “yes” to all of the above, “then you’ll probably care about the election on November third,” says Jill Biden, before she — and the actors — go on to ask viewers to join them on Tuesday for a “grassroots fundraiser.”

Jill Biden’s partnership with the Queer Eye cast makes for the Biden campaign’s latest effort in summoning celebrity star power to bolster Joe Biden’s brand ahead of the November election. At the Democrat National Convention, for example, Cinderella star Billy Porter performed a bizarre rendition of Buffalo Springfield’s “For What It’s Worth.”

Pop star Billie Eilish later took to the DNC stage to proclaim that President Donald Trump “is destroying our country and everything we care about,” adding, “we all have to vote like our lives and the world depend on it.”

Last year, Queer Eye‘s Jonathan Van Ness initially endorsed senator Elizabeth Warren (D-MA) for president. Warren thanked the actor by posting a cringe phone call between the two of them. “The moment I knew I was endorsing [Elizabeth Warren’] was last month when I misplaced my HIV meds,” wrote Van Ness on Twitter.

“It cost $3500 to replace them out of pocket with ‘amazing’ plantinum level insurance,” he added. “Healthcare shouldn’t be for profit ever, it’s a human right.”

Trump is such an unbearable orange faced cowardly BOIL. The health care bill McCain voted against would have stripped healthcare from Americans with pre existing conditions. McCain did the right thing when Trump was & still is lying his pasty ass off. https://t.co/KoyycKwDEU

Portland Mayor v. Trump: The Gloves Are Off