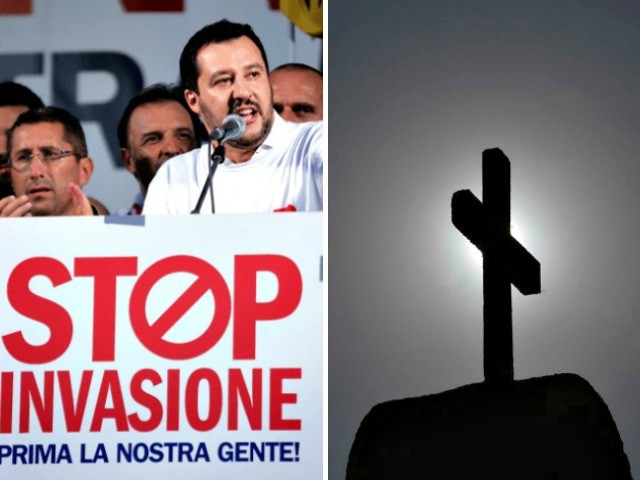 Interior minister Matteo Salvini wished all Italians a “happy and holy Christmas” this week, adding that he hopes no one is offended by such language.

I wish “all Lombards and Italians a happy and holy Christmas, hoping that no-one is offended, because we are now in strange times,” Salvini said on Thursday, before adding that his government had given Italians “a budget that finally gives back instead of taking away.”

Earlier this month, Mr Salvini reacted strongly to attempts by educators to remove manger scenes from schools in order not to “offend the sensitivity of children of other religions.”

“We are in Italy and I think no child of any religion is offended by the ox, the donkey, and baby Jesus,” the minister said.

“I will put up a Nativity scene and I hope there is no educator who thinks that baby Jesus is going to offend somebody,” he said.

In the northern Italian town of Favaro Veneto, the principal of the Istituto Alpi put up no manger scene, saying that there were insufficient funds to pay for the display. When regional councilor, Gabriele Michieletto, called her bluff, personally paying for a Nativity set and bringing it to the school, the principal refused it.

Despite Mr Salvini’s defence of Christian language and symbolism in Italy, he has been the target of ongoing attacks from Catholic leaders and institutions.

Most recently, an Italian bishop published a Christmas letter last week criticizing Salvini’s security decree, saying it has abandoned “thousands of immigrants of every colour and origin living in our cities.”

Far from being a “sacred representation,” this year’s Nativity scenes will be a “living dramatization” of migrants like Jesus in search of a home, said Bishop Giuseppe Piemontese, of the central Italian diocese of Terni, thanks to recent legislation aimed at curbing illegal immigration.

Matteo Salvini, the most trusted politician in Italy, has been called everything from the antichrist to Satan.

In an online interview with Vanity Fair, the director of Famiglia Cristiana, Antonio Rizzolo, suggested that his magazine was speaking for all Italian clergy.

What we sought to do was “underscore how the presidency of the Italian Bishops conference, many individual bishops of north and south, and Catholic religious and laity are reacting to certain scornful and aggressive tones from the Deputy Prime Minister regarding the migrant crisis,” he said.

Italian Priest: Jesus Christ was Like Asia Bibi, Not an Illegal Migrant https://t.co/X5wGrhmbG7

For his part, Mr Salvini has insisted that uncontrolled immigration “leads to chaos, racism, and social conflict,” whereas the “only antidote to racism” is orderly migration.

Orderly immigration “guarantees the rights of both Italians and immigrants,” Salvini said in an interview earlier this year, unlike the unchecked immigration of the past few years, which has resulted in “chaos.”

“The only antidote to racism — and the Italians are anything but racist — is to return to a respect for laws and regulations, and monitor who enters and who leaves this country,” he said.