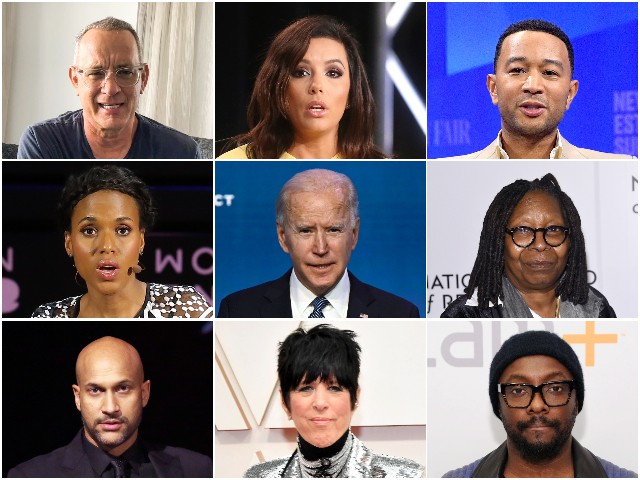 Biden’s chosen theme for his inauguration is “America United,” though the roster of artistic talent, which includes Lady Gaga singing the national anthem, represents some of Hollywood’s most left-wing voices. Many of the events will be virtual in keeping with COVID-19 safety protocols.

On Saturday, the celebration will officially kick off with “America United: An Inauguration Welcome Event Celebrating America’s Changemakers.” The inauguration committee said the concert will “celebrate America, reflect and honor our history, and highlight the incredible diversity of the nation.” It will feature appearances by anti-Trump celebrities Whoopi Goldberg, Netflix’s Atypical actor Nik Dodani, actress Cristela Alonzo, and actor Darren Criss.

The Resistance Revival Choir is set to perform during the concert. As its name suggests, the ensemble, which consists of female and gender “non-binary” singers, was founded in opposition to President Trump. Also set to perform is the Grammy-nominated band Black Pumas.

Other concerts leading up to inauguration day include “United We Serve,” which will honor the National Day of Service, on January 18, and feature appearances by Diane Warren, Lynn Whitfield and Bebe Winans; and a nationwide COVID-19-themed memorial event on January 19.

Eva Longoria and Kerry Washington will serve as hosts for the Inauguration Day telecast, while Bruce Springsteen, the Foo Fighters, and John Legend are also set to appear. Later in the day, Tom Hanks will host a primetime telecast titled “Celebrating America” that will air on the three major broadcast networks and cable channels including CNN and MSNBC.

Messing has promoted physical violence against President Donald Trump, saying in a tweet that she hopes the president gets raped in prison. Twitter hasn’t penalized the Hollywood actress, who comment appears to violate the platform’s terms of service.

Another inauguration fundraiser set for Friday will feature cast members from the TV series The West Wing, Scandal, and Designated Survivor. Actor and former Obama staffer Kal Penn will host the event.