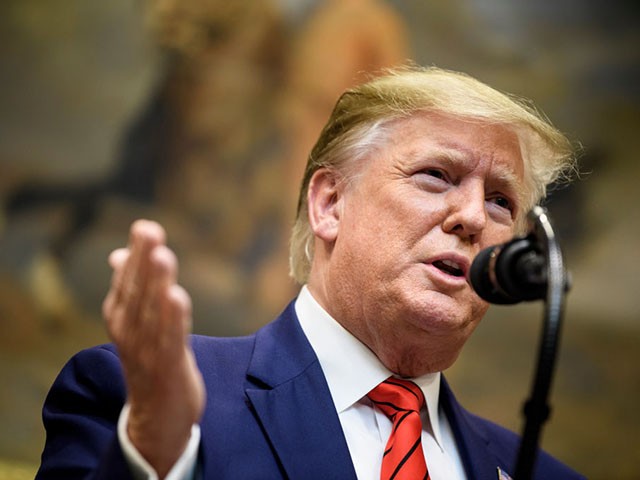 President Donald Trump may open up jobs for more than 300,000 American graduates by sending a similar number of long-term H-1B visa workers back to India and China, according to an article in Forbes magazine.

“The plan, on the wish list of anti-immigration organizations, is to force foreign nationals waiting years for employment-based green cards to go through the “labor certification” process again in the hopes many will not succeed,” wrote Stuart Anderson, a former deputy for President George W. Bush. He now works closely with employer groups who favor H-1B workers over American professionals.

Anderson’s fear is based on a close reading of Trump’s unprecedented and popular June 22 decision to temporarily stop and also reform the H-1B pipeline. The pipeline allows Fortune 500 companies to a workforce of roughly 600,000 compliant foreign graduates in jobs needed by American professionals. The workforce includes 300,000 Indians who are being allowed to stay long past the expiration of their visas.

Trump adopted the June 22 reform plan amid pressure and activism by a new wave of white-collar professional groups. In 2019, these activists also blocked the S.386 bill to fast-track green cards to the visa workers

“These visas are the U.S. tech industry’s dirty secret,” according to Vivek Wadhwa, an Indian-born technology executive. “They tie the foreign workers to their jobs and allow the employer to pay them less.”

Anderson wrote in Forbes on June 25:

A word of caution: There is no formal regulatory language for this plan. However, section 5 of the recent presidential proclamation, states, “The Secretary of Labor shall, in consultation with the Secretary of Homeland Security, as soon as practicable, and consistent with applicable law, consider promulgating regulations or take other appropriate action to ensure that the presence in the United States of aliens who have been admitted or otherwise provided a benefit, or who are seeking admission or a benefit, pursuant to an EB-2 or EB-3 immigrant visa or an H-1B nonimmigrant visa does not disadvantage United States workers in violation of section 212(a)(5)(A) or (n)(1) of the INA (8 U.S.C. 1182(a)(5)(A) or (n)(1)).”

In plain language, the White House may require the Fortune 500 companies to show that the subset of roughly 300,000 Indians (who have stayed longer than six years) are still needed for jobs that employers said could not be filled by Americans during the last 11 years.

This is a labor-force test that the Fortune 500 executives and their Indian workers are unlikely to pass — without top-level political intervention.

Hundreds of thousands of Americans are ready to do the jobs that the CEOs transferred to the 300,000 Indians.

“Of the entire [American technology] workforce, only about a third of those with STEM [science, technology, engineering or math] degrees are employed in STEM jobs,” according to testimony provided by Hal Salzman, a workforce professor, to a Senate committee on February 25, 2020. He told the Senate’s judiciary committee:

Overall, our colleges and universities graduate twice the number of STEM graduates as find a job each year; that is, only about half of our STEM graduates enter the STEM workforce.

The fundamental problem of U.S. and foreign IT outsourcing firms’ hiring practices is the exclusion of U.S. workers–whether native or immigrant, citizen or permanent resident—which is made possible by specially crafted legislation for this purpose; it is legislation that serves as a congressionally-provided subsidy to a highly profitable industry to hire [H-1B] guestworkers at the expense of jobs for U.S. workers.

The scale of the CEOs’ preference for foreign workers is shown by a March 2020 report by the Congressional Research Service (CRS). The report says 568,414 Indian workers and their Indian-born dependents, plus 59,034 Chinese workers and their independents, are still waiting — and while working — for the green cards promised by CEOs in exchange for work.

Federal regulation allows this CEO-created workforce to stay in the U.S. jobs, long past the expiration of the six years allowed to most H-1B workers.

So the regulation allows CEOs to create a vast bonded workforce by dangling green cards in front of desperate Indian graduates who really do not want to go back to their underdeveloped, corrupt, and caste-ridden country.

The CRS report predicts the bonded workforce will grow to 1.3 million Indians by 2030 as Fortune 500 CEOs dangle green cards to imported Indian workers instead of paying cash to American graduates.

This population of bonded workers includes roughly 350,000 Indians, said Anderson. Without visa extensions, most would have to go home because U.S. companies have awarded green card approvals to many more Indian workers than can get green cards each year.

The Indians get their green card approvals from the CEOs in exchange for working for long hours — without complaint, for years — in the middle-class jobs.

Those jobs were held by U.S. professionals who never expected their government to let CEOs destroy their careers, and often, their families.

One victim of the national outsourcing trend was Donna B. She is now retired to a small town in Arizona and earns so little money that she is not required to pay off the $50,000 in student loans she owes from her software education in 1989.

Divorced and with five children, “I was 36 years old when I started” in 1989, she told Breitbart News. After her first job in Connecticut, she moved to Arizona by 1993, where she met her first Indian H-1B workers. “They did not mix with any of us and could not speak English,” she said.

In 2002, “I had my first layoff, and I could not find a job anywhere for four years,” she said. She applied for a job in Boston to repeat the same work she had done in Arizona, but “I could never get an interview. I was being stalled, and nothing happened.” She eventually landed a job at Caremark but was laid off in 2010 after the company merged with CVS. “The next year, they brought in Indians to do exactly what I had been doing,” she said.

“I never found a job after that. … I applied for tons of jobs, tons. … I never got a response except ‘Thank you for applying.’” Many of the job interviews were conducted with Indians from the outsourcing companies, each of which has an economic incentive to fill jobs with cheap Indian H-1Bs, not Americans, she said. “I’ve gotten calls, and I’ve gotten emails from Indians [when applying for jobs]. … It just goes nowhere,” she said.

“Last year, I retired, so my retirement is peanuts,” she said. “I live in a tiny town called Arizona City, which doesn’t have mail service.”

The New York Times described the 2018 suicide of Geoffrey Weglarz, an accomplished computer executive who could not find a job after 2011 amid the incoming waves of H-1B workers:

“I’ve applied for 481 jobs,” he said on the show. “None of them have panned out. They think that anybody over a certain age is going to be used up.”

Mr. Weglarz was cremated in September. His sister plans to scatter his ashes in Manhattan, home to many successes in his acting years and where he began his computer career, long before the day he parked his car on the street and never left.

Median wages in Silicon Valley drooped by 14.2 percent from 1997 to 2017, according to the June 2020 “Silicon Valley Pain Index,” a report led by a progressive professor, Scott Myers-Lipton, at San Jose State University. The “net worth of the top 10 richest Silicon valley moguls” hit $248 billion, the report said.

Antifa’s youth are college-grad losers in a stock-market economy.
Blue-collars were slammed by mass immigration & free-trade outsourcing.
White-collars are being hit by visa-worker outsourcing to India & China.
‘Diversity’ is the estb.’s hegemony.#H1Bhttps://t.co/DLx5EAyqi4