Democrats Must ‘Stop Being Obsessed Over Impeachment’ 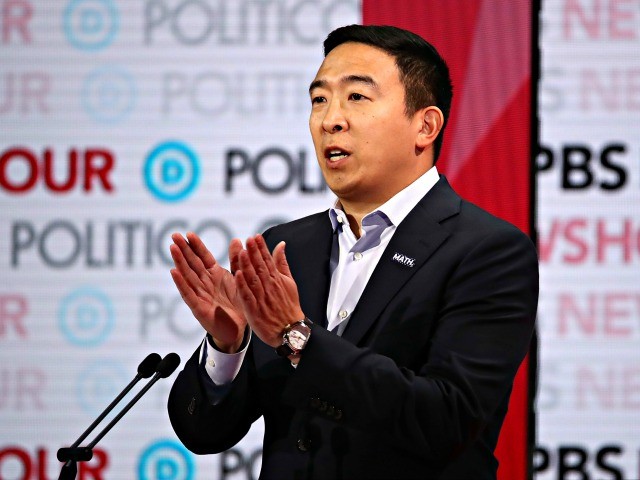 Businessman Andrew Yang said during the PBS/Politico Democrat primary presidential debate that Democrats must “stop being obsessed over impeachment” of President Trump and focus on the bleeding and outsourcing of manufacturing jobs across the United States.

Yang, who has used his campaign to promote Universal Basic Income, blasted the establishment media, the Democrat Party establishment, and their pushing of the Russia collusion hoax, as well as their hyping of impeachment:

What we have to do is we have to stop being obsessed over impeachment, which … strikes many Americans like a ball game where you know what the score is going to be. And start actually digging in and solving the problems that got Donald Trump elected in the first place.”

It’s clear why Americans can’t agree on impeachment. We’re getting our news from different sources and it’s making it hard for us to even agree on basic facts. Congressional approving rating last I checked is at something like 17 percent and Americans don’t trust the media networks to tell them the truth. [Emphasis added]

The media networks didn’t do us any favors by missing the reason why Trump became president in the first place. If you turn on cable network news today, you would think he’s our president because some kind of combination of Russia, racism, Facebook, Hillary Clinton, and emails all mixed together. [Emphasis added]

But Americans around the country know different. We blasted away four million manufacturing jobs that were primarily based in Ohio, Michigan, Pennsylvania, Wisconsin, Missouri. I just left Iowa. We blasted 40,000 manufacturing jobs there. The more we act like Donald Trump is the cause of all of our problems, the more Americans lose trust that we can actually see what’s going on in our communities and solve those problems. [Emphasis added]

Free trade advocates, like former Vice President Joe Biden, claimed at the time that NAFTA would create a million U.S. manufacturing jobs in the first five years. Instead, nearly a million American jobs have been certified by the federal government as being lost directly due to NAFTA, according to data gathered by Public Citizen. These are only the U.S. jobs that the Trade Adjustment Assistance (TAA) program recognizes as being lost to free trade and does not indicate the actual number of jobs lost.