Biden in Free Fall Since Last Debate Before Caucuses 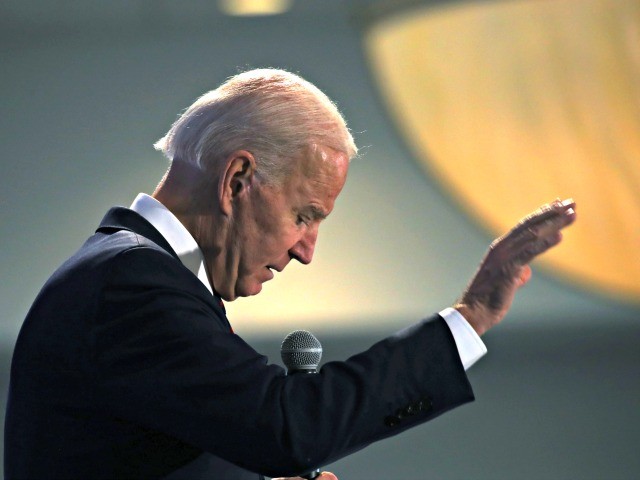 A poll of Iowa Democrats obtained exclusively by Breitbart News ahead of its public release shows former Vice President Joe Biden in a free fall since the last debate Tuesday before the upcoming caucuses, losing ground significantly from the day of the debate to three days afterward.

The survey, conducted by Rick Shaftan of Neighborhood Research and Media, found Biden losing 11.3 percent of support in the days following the debate—a huge dropoff that comes at the worst possible time for the one time 2020 Democrat frontrunner.

Biden is still in the lead in the survey, both before and after the debate, but his poor performance in Tuesday’s debate in Des Moines has set him on a trajectory downward at the worst possible time for his campaign, just weeks before Iowans vote in caucuses.

The survey of 300 definite or very likely Iowa Democrat caucus-goers was conducted from Jan. 14 to Jan. 17. The overall survey’s margin of error is 4.8 percent.

The overall numbers have Biden leading at 23.3 percent, with former South Bend, Indiana, mayor Pete Buttigieg in second at 17 percent. Sen. Elizabeth Warren (D-MA) is next with 14.7 percent, followed by Sen. Amy Klobuchar (D-MN) at 11.3 percent and Sen. Bernie Sanders (I-VT) at 10.3 percent.

But the bigger story here, according to pollster Shaftan, is what happened from before the debate to after the debate—and the changes that occurred fairly rapidly in the field.

On the day of the debate, Tuesday Jan. 14, Biden towered over the rest of the field with 30.1 percent on that particular day of the poll. Next best that day was Buttigieg at 16.5 percent, followed by Warren at 12.6 percent and Sanders at 10.7 percent. Klobuchar, that day, did not break double digits, finishing that day’s polling with just 8.7 percent.

The survey’s next three days, Jan. 15, 16, and 17—after the Tuesday debate—showed a very different story. Biden, while still in the lead, but dropped 11.3 percent down below 20 percent to just 19.8 percent. Sanders, who got into a massive battle with Warren on the stage that night, also dropped a half percent to 10.2 percent.

The pollster, Shaftan, wrote in a memo provided exclusively to Breitbart News ahead of its public release, wrote:

Biden’s lead is based entirely on results from the first night, prior to the debate. Of all the candidates, he took the biggest hit that evening although Yang has also been hurt. The beneficiaries: Klobuchar and Steyer. Sanders has also lost ground to Warren. Joe Biden is essentially in freefall and despite his current lead, it’s highly unlikely he will win the caucus unless something changes in his favor rapidly in the last few days.

Shaftan added that he expects Warren to continue picking away at Sanders’ support levels, slowly but surely, and that he similarly expects Klobuchar to eat into Biden support levels. Shaftan wrote:

Warren and Klobuchar have the advantage of both a motivated base and momentum after the caucus. Sanders and especially Biden have the opposite problem. Look for Biden to lose his lead over the next few days, and for Sanders people to start moving to Warren – something that will accelerate in the final days as Sanders starts to fade, which he will.

Businessman Andrew Yang, who did not make the debate stage in Des Moines, dropped from 2.9 percent before the debate to just one percent afterwards.

Also interestingly, the survey found that President Donald Trump—the incumbent Republican president seeking re-election against whomever Democrats nominate—got 4.7 percent of support overall in the survey of very likely and definite Iowa Democrat caucus-goers. Trump’s support among Iowa Democrats was down at 2.9 percent the night before the last Democrat debate, but spiked up to 5.6 percent in the three days following the debate. Trump won Iowa in 2016 against Democrat Hillary Rodham Clinton, flipping the Hawkeye State red for the first time in eight years and taking its six electoral votes on his way to victory.

Compulsory Indoctrination: Boys Have Periods Too

Thanks Mayor Lightfoot! Chicago’s Navy Pier May Shut Down Due to Coronavirus and Ongoing Riots