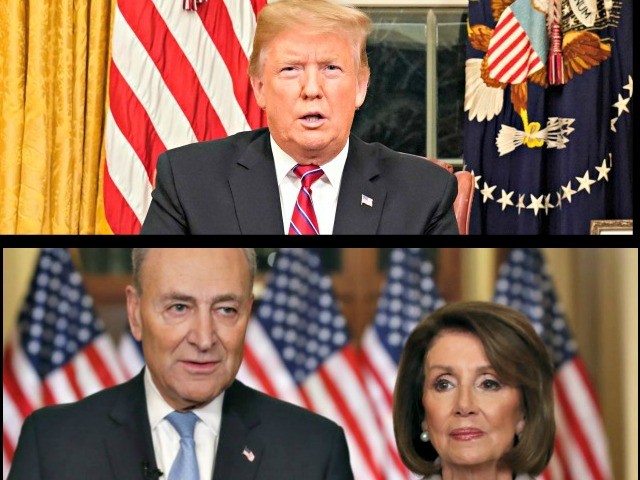 As of Saturday, when the partial government shutdown hits day number 22, the government will have been shut down for the longest time ever in the history of the United States of America.

Funding lapsed for about a quarter of the federal government in late 2018, a few days before Christmas, as Democrats in the U.S. Senate blocked efforts by President Donald Trump to fund his planned border wall along the U.S. border with Mexico.

Republicans still controlled the House and passed a measure of their own to fund the president’s wall to the tune of more than $5 billion while keeping the government open.

The Senate, which remains under GOP control, passed a different measure that would have funded the government but provided zero dollars for the wall.

The impasse led to a shutdown of about a quarter of the federal government, with several key departments and agencies including the Department of Homeland Security (DHS), the IRS, the Department of Transportation, and many others–with as many as 800,000 federal workers affected–closed except for essential services.

The shutdown lasted through Christmas, through the New Years holiday, and into the beginning of 2019 when, on Jan. 3, the Democrats–who won a U.S. House majority in the midterm election–took over the House of Representatives.

Democrats have passed measures aimed at reopening government but denying Trump his border wall, and now more than a week into the new Congress, the shutdown has reached the longest duration in the history of the country, with no end in sight.

Trump remains dug in, his position being that Democrats should provide the votes to fund the border wall and other security measures, while Democrats are similarly dug in, with ardent opposition from their leaders House Speaker Nancy Pelosi and Senate Minority Leader Chuck Schumer insisting they will never fund a barrier along the border.

Trump faced off with Pelosi and Schumer earlier this week in rivaling addresses to the nation, with the president using his first Oval Office address as Commander-in-Chief to appeal directly to the American people for help in procuring funding for a border barrier.

Trump said to the public in the eight-minute Tuesday evening address televised by all the major broadcast television networks and cable news channels:

My fellow Americans: Tonight, I am speaking to you because there is a growing humanitarian and security crisis at our southern border. Every day, Customs and Border Patrol agents encounter thousands of illegal immigrants trying to enter our country. We are out of space to hold them, and we have no way to promptly return them back home to their country. America proudly welcomes millions of lawful immigrants who enrich our society and contribute to our nation. But all Americans are hurt by uncontrolled, illegal migration. It strains public resources and drives down jobs and wages. Among those hardest hit are African Americans and Hispanic Americans. Our southern border is a pipeline for vast quantities of illegal drugs, including meth, heroin, cocaine, and fentanyl. Every week, 300 of our citizens are killed by heroin alone, 90 percent of which floods across from our southern border. More Americans will die from drugs this year than were killed in the entire Vietnam War.

Trump detailed for the public his specific ask from Congress for what he believes will secure the border and stop the flow of illegal immigration–thereby ending the crisis. The president said:

My administration has presented Congress with a detailed proposal to secure the border and stop the criminal gangs, drug smugglers, and human traffickers. It’s a tremendous problem. Our proposal was developed by law enforcement professionals and border agents at the Department of Homeland Security. These are the resources they have requested to properly perform their mission and keep America safe. In fact, safer than ever before. The proposal from Homeland Security includes cutting-edge technology for detecting drugs, weapons, illegal contraband, and many other things. We have requested more agents, immigration judges, and bed space to process the sharp rise in unlawful migration fueled by our very strong economy. Our plan also contains an urgent request for humanitarian assistance and medical support. Furthermore, we have asked Congress to close border security loopholes so that illegal immigrant children can be safely and humanely returned back home.

Most importantly, the president noted, his proposal seeks $5.7 billion in this appropriations bill for border wall construction.

“Finally, as part of an overall approach to border security, law enforcement professionals have requested $5.7 billion for a physical barrier,” Trump said. “At the request of Democrats, it will be a steel barrier rather than a concrete wall. This barrier is absolutely critical to border security. It’s also what our professionals at the border want and need. This is just common sense.”

Trump ended his speech by asking the public to call Congress and get them to fund the wall.

But in their also-televised rebuttals, Pelosi and Schumer fired back that Democrats would not support a physical barrier to secure the border. Pelosi bashed the wall as an “obsession” of Trump’s, and called a wall “expensive and ineffective.” Schumer, meanwhile, slammed the wall as “ineffective” and “unnecessary.”

Since the dueling addresses on Tuesday night, Senate Republicans–in conjunction with a White House negotiating team helmed by Trump’s son-in-law Jared Kushner–attempted to craft a deal that traded legislative amnesty for recipients of former President Barack Obama’s illegal executive amnesty program Deferred Action for Childhood Arrivals (DACA) and other open borders wishes for the border wall. That deal quickly fell apart within a timeframe of less than a full day of discussion, as they could not muster a serious plan and Democrats were opposed to any deal that funds the wall.

Democrats, meanwhile, have had trouble holding together their members in opposition to the wall. As Breitbart News reported earlier this week, several top Democrats–including several in or close to leadership on either side of Capitol Hill–have suggested they would be open to a deal that funds the wall or some kind of fence or barrier along the border.

Meanwhile, Politico reported that several freshman Democrats just elected to their first terms in the House are now questioning whether Pelosi and Schumer have the right strategy when it comes to opposing any barrier along the border. The piece quotes Rep. Abigail Spanberger (D-VA) as saying she is facing enormous pushback from her constituents in Virginia against Democrat opposition to the wall.

“If I am getting comments and contact from my constituents expressing concern that the Democrats are not prioritizing security, then I think we can do better,” Spanberger said.

Rep. Colin Allred (D-TX), a co-president of the House’s freshman class, also says Democrats are not doing themselves any favors by following the Pelosi-Schumer strategy.

“I don’t think that it’s the Democrats in the House’s fault that we are in a shutdown,” Allred said, per Politico.“But I do think it’s setting us back in terms of those coalitions we’re trying to build.”

Rep. Bill Foster (D-IL), a senior Democrat from Illinois who has served in Congress for more than a decade, also said during a private meeting that Democrats should consider a deal that funds the wall in exchange for Democrat priorities.

“I think it’s something that should be in the discussion here, because things are obviously going so slowly,” Foster said, according to the Politico report. “I think this is ground that most Democrats should feel comfortable standing on.”

Allred also said he would be open to funding the wall in some kind of a bigger deal. “I’m not going to rule anything out, I really am not,” Allred said.

Looming over all of this, of course, is the possibility that Trump may declare a national emergency and use executive authority to build the wall along the border without approval from Congress. Trump insists that he has the authority, as the nation’s chief executive and Commander-in-Chief of the Armed Forces, to declare such a national emergency and divert federal resources to build the wall. Some legal scholars agree with him, and some are opposed, but if Trump goes that route it will undoubtedly face a major legal challenge in much the same way his travel ban executive order did at the beginning of his presidency.

While Trump has been touting the possibility of a national emergency declaration for several days–and some speculated he might do it in his Oval Office address this past Tuesday, a move that did not materialize in the end–on Friday the president said for now he does not want to take that extraordinary step.

All of that leaves the situation in much the same place now, with this as the record longest shutdown in the history of the federal government at 22 days deep, as it was when it started.