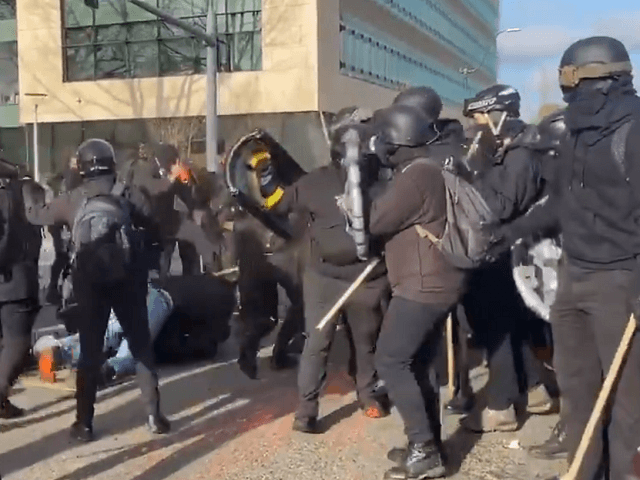 Antifa organizers call for “targeted destruction” and “direct action” across the United States during the inauguration of Joe Biden as the nation’s 46th president. The organizers plan to confront Trump supporters in multiple state capitals.

“It’s not f**king over,” one Antifa poster states while calling for “direct action” at Occidental Park in Seattle, Washington, according to a tweet by independent journalist Andy Ngo.

#Antifa are continuing to put out the call for riots throughout the U.S. on 20 Jan. These are some of their flyers for Seattle, northern California & Denver. pic.twitter.com/jcoYYHg7a6

Another poster called for “targeted destruction against corporations assisting ICE.” In Denver, a BLM-Antifa poster calls for a march to the capitol to counter-protest the Trump rally coinciding with the timing of Biden’s swearing-in.

In San Francisco, another Antifa group plans a “Black Liberation Smash Fascism” rally to drive from the Bay Area to Sacramento.

Antifa Sacramento tweeted their own call for action.

Shout out to @IGD_News ! And shout out to those that put out the weekly This Week In Fascism column! Check out this weeks entire column & stick around for our call to action they put at the bottom!
Wednesday, J20 – Fremont park – 10am! #AlllOutForSachttps://t.co/SjDOQtuSLo pic.twitter.com/W8LxynXGOe

Bob Price serves as associate editor and senior news contributor for the Breitbart Texas-Border team. He is an original member of the Breitbart Texas team. Price is a regular panelist on Fox 26 Houston’s Sunday-morning talk show, What’s Your Point? Follow him on Twitter @BobPriceBBTX, Parler @BobPrice, and Facebook.